Although the final FY2017 budget increases funding for education and homeless programs, prospects for the FY2018 budget may be much different. Without an agreement on how to reconcile larger budget issues, such as caps on discretionary and non-discretionary funding, the prospect of both targeted and across-the-board budget cuts in FY2018 looms large.

Education and Homeless Programs in the Final FY2017 Budget

The chart below summarizes funding for selected education and homeless programs of direct significance for children and youth experiencing homelessness. 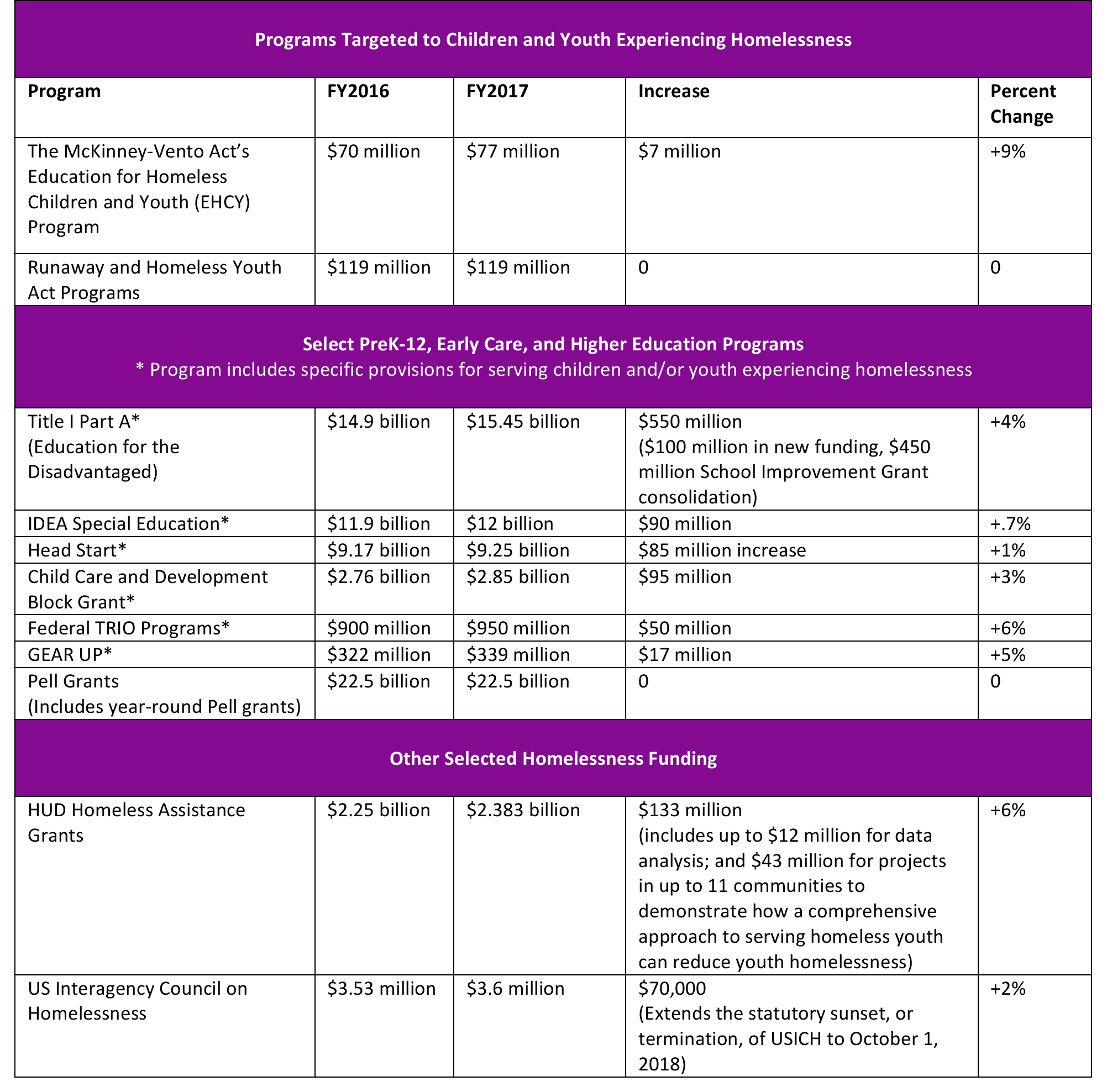 Putting the EHCY Budget in Context 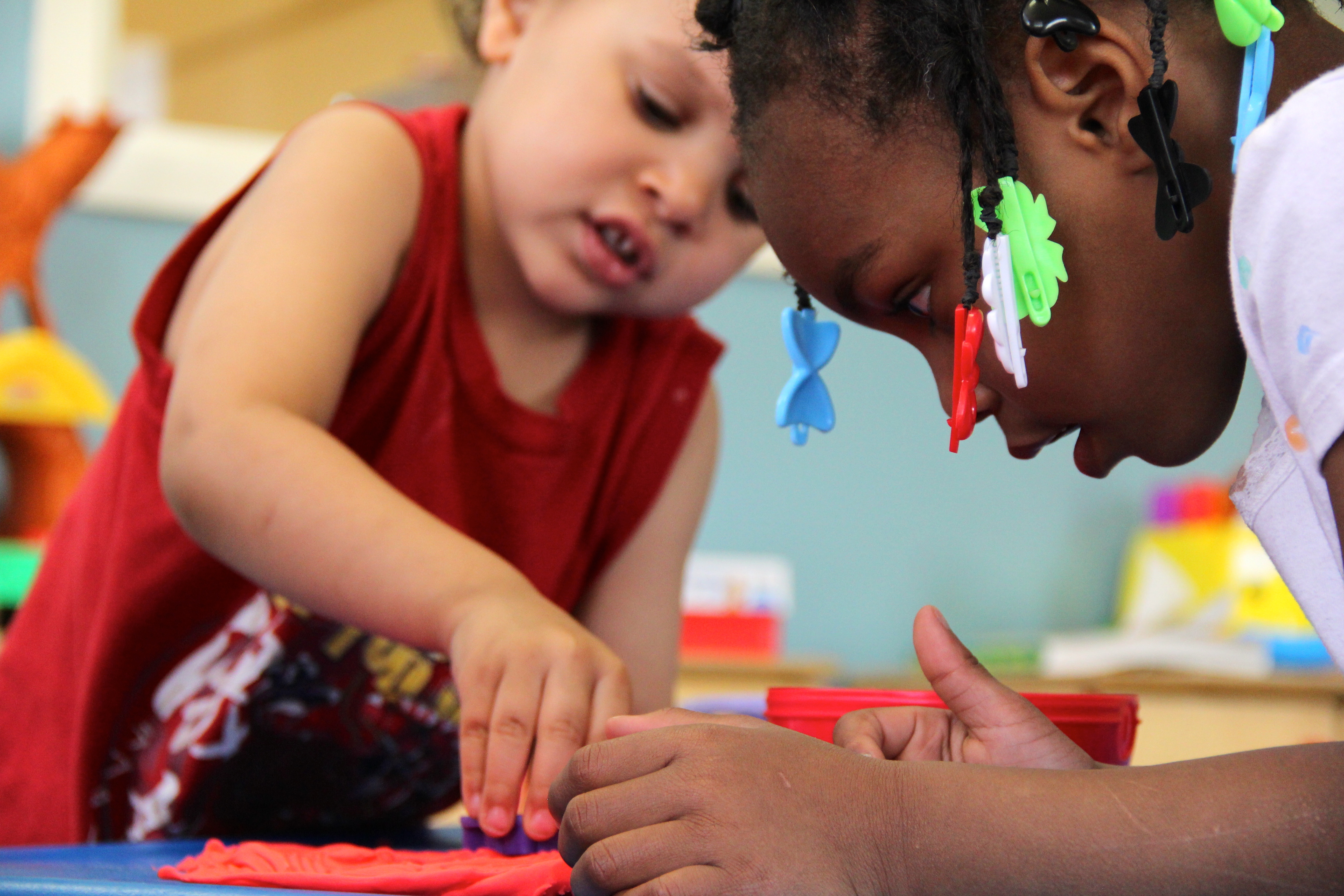 The nine percent increase in funding for the EHCY program in the FY2017 budget is much needed. Without the specific, targeted assistance of the EHCY program in removing barriers created by homelessness, children and youth experiencing homelessness are much less likely to benefit from any other investments in education. And without an education, they are unlikely to obtain the skills they need to avoid poverty and homelessness as adults. Indeed, children and youth experiencing homelessness are particularly at risk for educational failure, dropping out of school, and human trafficking.

Yet federal funding for EHCY has not kept up with the rate of growth of student homelessness. Between the 2006-2007 school year (pre-recession) and the 2014-2015 school year (the most recent year for which national data is available), the number of children and youth identified and enrolled in public schools increased by 85%, from 679,724 homeless students to 1,263,323 homeless students. During that same time period, appropriations for the EHCY program grew by only 5%, from $61.9 million in FY2007 to $65 million in FY2015.

Currently, less than one in four school districts receive direct support through the EHCY program. As a result, homeless children and youth continue to face significant barriers to school enrollment and continuity. A 2014 GAO Study (GAO-14-465) noted that while school districts conduct a range of activities to support homeless children and youth and to leverage resources through collaboration, challenges persist that are directly related to low appropriations. These challenges include under-identification of homeless students; limited staff and resources to provide services; the cost of transportation; and responding to students made homeless by natural disasters.

Congress recognized the importance of the EHCY program by strengthening its provisions in the Every Student Succeeds Act of 2015 (ESSA) reauthorization. ESSA increased the authorized funding level for the EHCY program to $85 million, making it the federal program receiving the largest percentage increase in the entire Elementary and Secondary Education Act reauthorization. 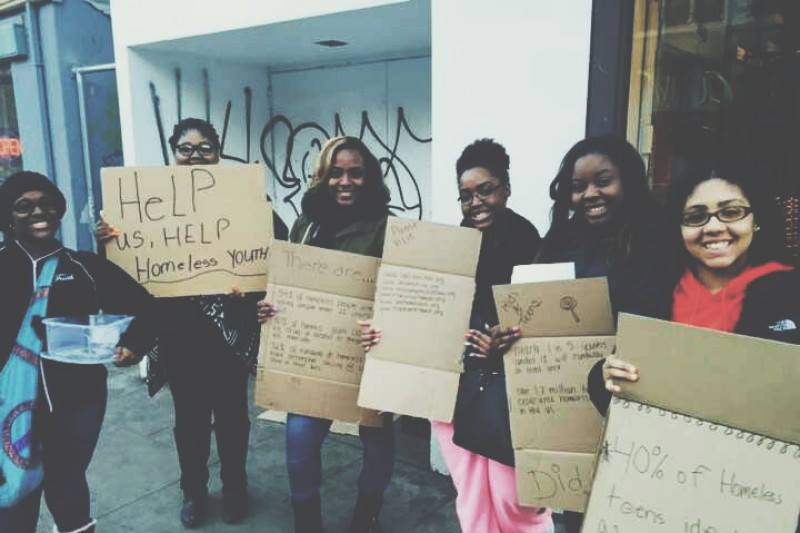 SchoolHouse Connection is very concerned about the lack of a funding increase in the FY2017 bill for the Runaway and Homeless Youth Act (RHYA) program.  The RHYA program helps youth experiencing homelessness by meeting their immediate needs, providing long-term residential services, and conducting prevention and outreach efforts to move youth and young adults out of homelessness. The RHYA program is unique and essential; no other federal homeless assistance program provides the same developmentally appropriate services for adolescents and young adults with the same depth of expertise. While it is our hope that the Youth Homelessness Demonstration Projects funded through the U.S. Department of Housing and Urban Development (HUD) will help communities implement collaborative, interagency responses to youth homelessness that include education, the Youth Homelessness Demonstration Projects are not a substitute for robustly funded RHYA programs.

Now that the FY2017 budget has been wrapped up, Congress will focus more attention on the FY2018 budget, and disagreements about basic budgeting issues will take center stage. Without an agreement on how to reconcile larger budget issues, such as caps on discretionary and non-discretionary funding, there is a significant risk of both targeted and across-the-board budget cuts in FY2018.

It is imperative that educators, service providers, community members, and others who are concerned with the well-being and future of homeless children and youth get involved in the FY2018 budget discussion. As a first step, we urge you to meet with, and/or send a letter to your U.S. Senators and U.S. Representative in support of EHCY and RHYA funding in the FY2018 budget. Communication between educators, service providers, and Congress had positive effects on the final FY2017 bill; even greater efforts will be necessary for FY2018.