Five Questions with Tina Marie: How My Education Helped Me Push Through Adversity 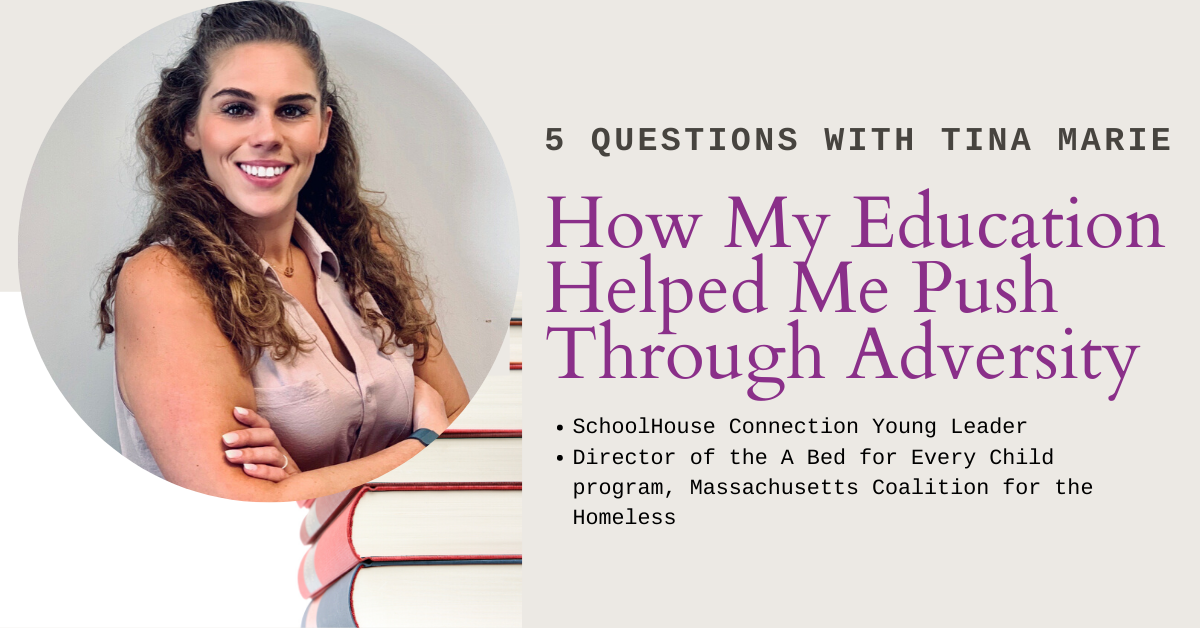 Tina Marie is a SchoolHouse Connection Young Leader and the current Director of the A Bed for Every Child program at the Massachusetts Coalition for the Homeless, which seeks to provide beds for children who are living in poverty without a bed of their own. Before leading this program, she was the Coalition’s Community Organizer and Legislative Advocate, helping to manage successful public policy campaigns that directly addressed the need to prevent and end homelessness by strengthening state-funded resources for Massachusetts’ most vulnerable residents. During this time, Tina Marie often shared her own experiences as a homeless youth at the state and federal level to help identify the needs of youth who are at-risk of or are currently experiencing homelessness. Tina Marie reports, “When I am not adulting, I love the outdoors, volunteering, cooking, and indulging my love for seeing and experiencing new places.”

Why is education important to you?

On a personal level, no matter what chaos was going on in my life (usually out of my control), school was my only constant. My school was a haven: a place that I knew would be in the same state whenever I returned. I could navigate the day-to-day with familiar faces, friends, resources, and constant structure.

In my previous work with young people, I often drilled down the need to identify education resources and get a young adult matched with any form of schooling–whether that’s completing high school, getting a GED, or even applying to a two- or four-year institution. Why? Because young adults need to continue to enrich their lives with education. Resourceful young adults who are at-risk or currently experiencing homelessness are arguably “street smart,” but a formal education is another tool to use to open doors for their future. Education is not one-size-fits-all, either. But further education in whatever it is you have already obtained will never harm you. I use my street savviness all the time, such as my intuition, my people-reading skills, and my ability to achieve my goals using often “non-traditional” means. But in a society that heavily relies on a completed education as a nonnegotiable, I am grateful that I have an education–an education that allows me to have a seat at the table. I do not believe I would have the same opportunities without it.

When I started to invest in myself, my teachers increasingly did the same. When I showed up or went the extra mile, they did, too. I showed appreciation and they rewarded me. That C- student climbed to C, then a B-, and then parked herself at a strong B. I became the president of various school clubs and participated in athletics, too.

In your experience, what are some of the most common causes of chronic absence for students experiencing homelessness?

Chronic absence amongst at-risk youth or youth who are experiencing homelessess is driven by many factors. In my experience, transportation was a leading cause–but other factors included lack of clothing that allows you to fit in with your peers, or challenges with personal hygiene. When you’re young, your peers can be ruthless and often lacking empathy, so it is hard to look past the superficiality of new, hip (or even just clean) clothes, shoes, and squeaky clean hygiene. For females, the lack of free hygiene products is a huge burden because even schools that provide them sometimes require students to actively reach out to an administrator or other adult–and that can be embarrassing.

Can you please share examples of how educators helped you while you were experiencing chronic absence and homelessness?

While I was experiencing homelessness in high school, it was hard to get to school—period. I missed a lot of school in K-8, too. When I did attend school, I felt the frustration of my educators and I did not care whatsoever: detentions, referrals, and lots of “attitude.” I was coping horribly. Each day was hard. Holding myself accountable was tough. After my father passed away and throughout my mother’s incarcerations, I was left to survive alongside a family that did not care for me adequately. I relied on distant relatives, friends’ families, a teacher, and my guidance counselor. At different periods of my life, they dished out whatever they could: rides, meals, clothing, love, lots of guidance, and, at the most trying times, a home. At my lowest point, I had missed a large portion of high school, mostly due to lack of transportation but also by choice.

I fought to separate myself from the environment I was raised in, and I slowly realized that I was truant and that my grades were average—but that my opportunity to leave my past behind me was not based on the job I maintained or how much distance I put between me and my toxic family. So, one day I decided to show up. Believe me, it was hard to show up. Especially having a reputation in school as a student that didn’t care. A chronically absent student. A student that may not have “what it takes.”

When I started to invest in myself, my teachers increasingly did the same. When I showed up or went the extra mile, they did, too. I showed appreciation and they rewarded me. That C- student climbed to C, then a B-, and then parked herself at a strong B. I became the president of various school clubs and participated in athletics, too. Just as the opportunity to go to college became promising, a local program called HEAT arrived at my school and the stars aligned. The HEAT program (jointly funded by the McKinney-Vento Act, Title I, and local school district funds) provided educational and social work services which helped bridge the gap to apply for college. The program identified scholarships available to low-income students who faced adversity and helped me apply for FAFSA. HEAT also created a campaign that turned into a trust to help with any college costs that may not be covered. There were nice people in my hometown who generously invested in my future.

Adversity differs person to person. All that anyone needs to remember is that tomorrow is a brand-new day and, as long as your feet and your head are facing forward, you continue pushing yourself that way, too.

What do you wish teachers or other people at school had done to help you while you were experiencing homelessness?

I wish there were an educational service or even an orientation that outlined the services the school provided that included students. In my experience, I attended a grade-specific orientation each year that welcomed students and explained the expectations for students. I wish those orientations had also explained the expectations that we should have had for staff and educators. Having an auditorium full of excited new students is the perfect time to talk about access to contraceptives, health care, free lunch, a food pantry, a closetful of age-appropriate clothing, shoes, hygiene products, grief counseling, mental health resources, and community resources and programs. I believe students will be more proactive in asking for help knowing that what they need already exists. When I felt cherry-picked because of my need or socioeconomic status, I pushed back more–I wanted to blend in and hide, and ultimately that hindered my education and overall well-being.

Once I was given the tools to empower and advocate for myself, I felt the fruits of my labor. I began to embrace what made me who I am. I knew I was strong-willed and resilient, and I was no longer ashamed to have come from the depths of homelessness and poverty. I learned to put my pride aside and began to ask for guidance proactively. I was honest about my educational shortcomings and I began to reach out for my teachers because they made it clear that they were lifelong educators who were in it not for the pay, but to make a difference. Without fail, they began to reach back.

Nearly 10 years later, my life changed for the better. It did not unfold effortlessly. I found my voice. I questioned everything good and bad and advocated for myself constantly. I trusted my instincts. I advocated for others who were marginalized or voiceless. I found a healthy balance between survival mode and enjoying life as a young adult whose world is showered by sunlight and not rain.

What words of wisdom do you have for practitioners and students who want to advocate for themselves and their peers?

Adversity differs person to person. All that anyone needs to remember is that tomorrow is a brand-new day and, as long as your feet and your head are facing forward, you continue pushing yourself that way, too.

I hope that whoever reads this continues to fight for youth who have been silenced: youth who are marginalized because of their gender identities, sexual orientation, the color of their skin, the area they are from–or youth who are simply facing the devastating consequences of choices that were not their own.

It was Mahatma Gandhi who once said, “A nation’s greatness is measured by how it treats its weakest members.” Our communities are being nickel and dimed to access basic human rights, such as the right to access adequate and affordable housing, healthcare, and education. No one should ever fall victim to a system that is not working fast enough toward removing barriers to resources like accessible housing, healthcare, job training, and education. How great is our nation if, during the 2016-2017 school year, public schools identified over 1.3 million children and youth experiencing homelessness, from preK through high school?

Please vote with your conscience in every election.